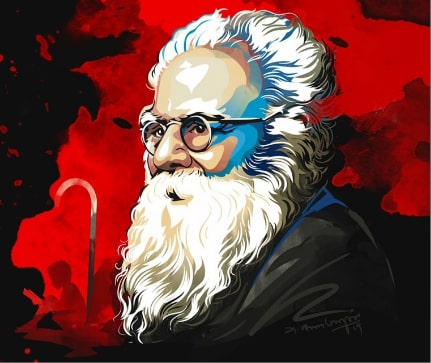 Periyar was a unique leader of abiding enthusiasm, indomitable courage, and an indefatigable industry and dynamic free thinking. Periyar had tackled all aspects of human life - social, economic, political, literary, philosophical, and religious - and there is no sphere of human activity which had escaped the attention and scrutiny by this grand and great intellectual.

Periyar had been in public life continuously for over 50 years, not for his personal gains or for securing positions in society, but only to serve humanity. It must be said that while others entered public life and acquired status or position for themselves, Periyar entered public life relinquishing about 29 high positions of dignity, he was holding then.

Periyar remained a fighter all through his life and fought his battles on many fronts. Though his formal education was modest, the opportunities he had, to listen to learned discourses with which his parents were associated, his own reading in later years and his travels abroad and within the country gave him breadth of knowledge and depth of insight. He was an original thinker.

The streak of rationalism was evident in him from his youth. The following observation by Periyar is significant:

“I have not believed in caste or practiced any religion since my youth. I might have put up appearances of conformity where obligatory. Similarly, I have had neither fear for, nor faith in, God. I would not have desisted from doing something I wanted to do, fearing God’s anger or divine punishment; similarly, I would not have done anything against my will to please or receive favours from God.”

Periyar was not an intellectual of any higher study, postulating and enunciating theories about the heaven and earth, but an active fieldworker who carried his message to the people, and delivered it in a language that was understood by the illiterate millions, and through methods that were appropriate to them. The apparent crudeness of some of his techniques in the eyes of the elite is to be viewed against this background.

To prove to the masses that the idols of gods were nothing more than the stone or bronze they are made of, he broke the idols of Ganesha, burnt pictures of Rama, and denigrated the objects of worship. He exposed claims of superhuman powers, ridiculed the Puranic (Mythological) stories and carried the torch of knowledge, enquiry and logic to the humblest of villages and the lowest of citizens. Awakening the common man, encouraging and motivating him to think on his own, and removing the shackles and chains on his mind continued to be his main mission till the very end.

Periyar was a rationalist with a difference. He was all the time a fieldworker. His audience ranged from intellectuals to illiterate masses from the slums and remote villages. He took examples from their day-to-day practices, dealt with them in detail, explained himself in a language intelligible to them, and exposed the patent follies in their faiths, beliefs and practices. Periyar kept an open mind and was refreshingly resilient in accepting and absorbing changes. While he was alert and responsive to new developments, he did not rely on any authority ancient or modern for his views. The opinions expressed and the measures advocated by him were essentially the results of his own experience, observation and contemplation.

He opposed the Brahmins when he felt that they have been oppressing the Non-Brahmin community. He opposed and condemned the male members of the Brahmin and non-Brahmin communities alike when he saw the injustice they were doing to the women-folk in general. He criticized bitterly, the Non-Brahmin caste-Hindus when he found them ill-treating and humiliating the members of the scheduled caste. In general, he was always on the side of the weaker sections of the community. He pleaded and fought for their cause without being approached or asked.

In his long public-life, he opposed many leaders and political parties and supported many individuals and institutions. On a later date, he supported those that he once opposed and also opposed those that he once supported. His critics and detractors see inconsistency or opportunism in the stands taken by Periyar. He was never inconsistent; his goals were clear in his mind; he worked towards them with single-minded devotion. Similarly, he believed that a reform movement should not aspire for power and fight elections. On more than one occasion, the highest of the offices available at that time in the State was offered to him. He consistently turned down such offers and kept his followers away from fighting elections. The non-Brahmin community was not and is still not allowed to enter the sanctum sanctorum of the temples and officiate as archagas (priests) on the grounds of “inferior birth” as enjoined by the Hindu scriptures; although the temples were built, with the sweated labour of the non-Brahmins. As an atheist, Periyar had no belief in the institution of temples. As the greatest champion of human rights and valueshe detested the ignominy. To assert human rights, Periyar announced a campaign to enter the sanctum sanctorum of Hindu temples.

Periyar was the first great rationalist leader the world has ever known to declare assertively that
‘There is no god,
and no god at all,
he who created god was a fool,
he who propagates god was a scoundrel  and he who worships god is a barbarian.”

The primitive man, owing to his ignorant thought, believed in a supernatural being or god to control the world. The theist proclaims that god cannot be seen, cannot be touched or cannot be felt. The conception of god is thus without foundation. Periyar, therefore, asserted that the man who created god was a fool.

Knowing fully well that there was nothing called god, the theists produced religions and a mass of religious literature depicting god’s incarnations on earth to punish those who repudiated them. They created the heaven and the hell to tempt and terrify the gullible mass. Periyar, therefore, called the person who propagated god a scoundrel.

Periyar said that one who worships god is a barbarian. A barbarian does not think rationally. One who worships god gives the go-by to this sense of reasoning and clings to blind faith. The conception of god was made when a man was a barbarian. But the people continue to worship god even now without applying the test of what, why, and how and by shutting their eyes and ears to the ever- growing scientific achievements of the present times which expose nature and its potentialities.

Leading from the front... even now

The cornerstone of his virtue was his simple living. His ambitions were high, but his wants were modest; he kept them to the barest minimum. He was free from the addiction of any kind. He dressed in the simplest piece of cotton material; ate whatever was served: slept anywhere when he needed rest. Perhaps no saint, no ascetic would have reduced his needs of comfort to such an irreducible minimum as Periyar did.

The citations of the Government of India in the commemoration stamp issued by them to mark Periyar’s Centenary
“In particular, Ramasami preached inter-caste marriage and remarriage of widows. It was his firm conviction that orthodoxy, superstition, social discrimination and many other evils which persisted in the society should go. He waged a relentless battle against these till the very end of his life.” It will be interesting for all of us to know that it may be the first occasion in the annals of world history that an atheist was honoured and his services were appreciated by the Government of a country.

After 50 years of tireless striving, hard struggle and massive educational efforts through speeches, writings and demonstrations, he left behind him a society vastly different from the one he inherited - more alert, more questioning, less gullible, better educated, more modern and in general closer to the take-off point for a state of living that would be richer in all respects.

Periyar believed that education enfranchises and that the key to human liberation from intellectual, economic, social, and political bondage was to be found in education. Equalization of education opportunities continued to be the corner-stone of his struggle from the beginning. In his long public life, he might have made adjustments; shown accommodation, and reconciled with differences in policies here and there for the sake of certain larger interests; but he never made any compromise on Communal Representation; never supported any party, never allied with any leader who did not subscribe to this principle. He was convinced that there was no such thing as liberation for the ignorant: to them, freedom from one bondage would only mean submission to another. The ignorant would only change their masters and not shed them. In the history of the resurgence of India in the twentieth century, Periyar would come to be acknowledged as the pioneer and architect of the broad measures for equalization of opportunities in education and employment.

Periyar considered the caste system the cancer of the Indian society. To him, nothing was more important than putting an end to this abomination. He waged a relentless war against the caste system, especially against the practice of untouchability, and all its manifestations in the society. Temple entry, the abolition of caste-based discrimination in hotels and restaurants, inter-caste marriage, priesthood on the basis of preparation and not by birth, and the use of the language of the people for worship, instead of Sanskrit, were some of the positive measures for which he pleaded and fought throughout his life.

Periyar was a great humanist: he had no particular emotional attachment to any language or race, no faith in any religion, no preference for any caste no unquestioning commitment to any political philosophy. He judged and evaluated everything on the basis of its usefulness, functional efficiency, and equity. In a rational humanist like him, what appears to be the consistent hostility towards the Brahmins might seem somewhat irreconcilable. Periyar was convinced somehow, beyond doubt, that casteism was identical with Hinduism, and Hinduism to him meant Brahmanism and supremacy of the Brahmins. Consequently, his fervour for a casteless society and his crusade against the caste system and its pervasive influence made him denounce Hinduism as the source of this evil and Brahmins as the early authors and subtle perpetrators of this cancerous stratification.  He observed almost no restraint in demonstrating his contempt and expressing his anger. His mood was one of smashing the obsolete order, melting the ruins and pouring them into a new mould to forge a new order, a new society founded on reason, equity, and dignity of humanity.

His struggle for the cause of women has perhaps few parallels in the history of women's liberation in India. Child marriage, widowhood, dowry, the male domination, the myths and puranas that weave stories extolling servility in women as a virtue, were ridiculed, condemned and exposed by him day in and day out, in public meetings, marriage ceremonies, political platforms and writings. He saw clearly that the continuous occupation of women in bearing and bringing up children was the main cause of their confinement to the home and their complete dependence on men. He saw contraception as the most effective tool of women's liberation and was the earliest to advocate family planning. He introduced the concept of ‘Self-respect Marriage’, which stressed the equality of sexes, looked at family life as one of partnership and discarded all rituals that implied subordination of women to men. His liberation on women also emphasised and fought for their empowerment.